Written by Anthony
Updated over a week ago

Whenever a team or player has an issue on a specific match they can flag the match and click the Report Match Issue button on that Match Page. Once a match has been flagged, the tournament administrator will see the dispute in the Match Disputes section of their Tournament Management Page and the players will see that the organizer has been notified and should wait for an administrator to arrive in chat.

Tournament administrators will now see an upgraded administration tool in their Match Disputes with additional features that assist larger organizations to manage their events. The Match Dispute Dashboard lists who have reported issues, in which match, from which bracket, how long it has been since they raised the issue, if the issue was Resolved or In Progress, which administrator is handling the issue, and what the issue was about.

If a tournament administrator needs to open the Match Page of a dispute that is In Progress or Resolved, they can still easily do so by clicking on the open match button.

Once an administrator clicks on the Assign to self button, a new browser tab will open with that match page and it will automatically set the dispute into the In Progress status so other admins will know that the player is already being helped. Players will also see a notification that an administrator has begun reviewing the dispute and should use the chat to talk with them.

Players also have the option to remove their own dispute in the case that they mistakenly raised the issue or the players have resolved the issue themselves.

Once the tournament administrator has finished solving the player’s issue, they can then click Resolve Issue and choose the reason for the dispute. This ensures that the reasons organizers see on their dispute history accurately reflects the issues that actually occurred during their events. 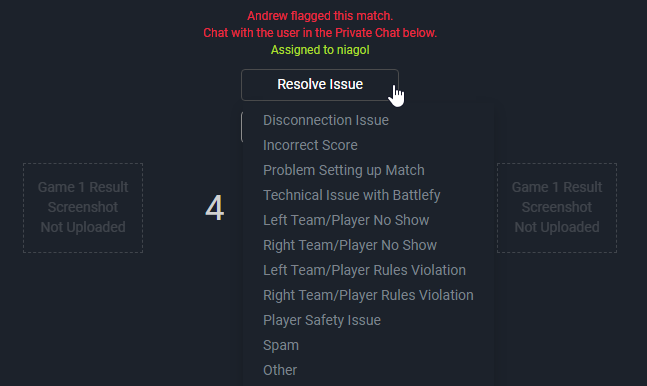